Round 3 - The 2016 Tuckerman Inferno Pentathlon.

"The first time you do something it's science. The second time it's engineering. The third time, it's being a technician. I am a scientist. Once I do something, I want to do something else."- C. Stoll.

Those who have raced with me know that I'll try most any race one time. If it seems like an adventure and there are good people there, why not? A second time go at the same event? Maybe. Unlikely. Unless it is pretty awesome. There are only a few events that have made this standard. Truth be told, most events aren't as much fun the second time around, particularly the difficult ones. Once the sources of suffering are known, the Fun-O-Meter never reads as high for me. A third time? Well, never. I simply don't do that.

Until this weekend, that is. This weekend's Tuckerman Inferno Pentathlon will be the first time I've had a go-around with the same event three times (in a row even!). Here is the thing about this race; every year it brings something different. In a nutshell, the event consists of a 8.5ish mile run, a 6-mile whitewater kayak, an 18-mile bike ride, a hike up Mt. Washington, and a climb and ski somewhere in Tuckerman ravine. My friend Ken Lubin, who has done this race over a dozen times, agrees that no two years are ever the same. Variable ski conditions in avalanche terrain, river levels, and the challenges that mother nature conjures up ensure that you can always expect the unexpected.

So, despite my love 'em and leave 'em ways with races, I found myself rolling out of bed on Saturday morning (way too early) to hit the starting line at the crack of dawn, ready to start my 3rd Tuckerman Inferno (yet, no less nervous at all).

Of all of the legs, the run leg is the most predictable. For me, predictably difficult. Having struggled with plantar fasciitis for the last two years, I can no longer describe myself as a runner. In fact, I can no longer describe myself as someone who likes to run. Unfortunately, as I have experienced in other years of the Inferno, everyone else on the starting line IS a runner. Those participating in the running leg of a 5-man relay team have identified themselves, above other things, as the team's runner. The other Elite athletes (Elite is the term given to those competing in all 5 events), as I have learned, are no less of runners, they just aren't ready to stop when the running leg is over. Where, might you ask, are the middle-aged off-the-couch weekend warriors that make up 75% of the pack for most road races? They are still home, snug in their beds. There is no back-of-the pack at the Inferno.

In the first three miles of the course, over a mile of it is straight uphill, gaining 600 feet in elevation (which feels more like 6,000 feet first thing in the morning). I generally like hills, so the first few miles are somewhat pleasant for me in a masochistic way. Where I run into trouble (no pun intended) is the downhill sections. My knees and feet detest the pounding of long-strided downhills, so my cadence is reduced to small shuffling steps. Waves of runners flock by me while I am helpless to keep pace. The miles go by and the wind picks up and I remind myself to keep putting one foot in front of the other. Eventually the run comes to an end, and I couldn't be happier to see my kayak and the beautiful glistening water of the Saco river ahead.
The kayak section is one of my favorite parts of the race. The river is clean and cold, and pine trees hang over the river banks in a way that would invite my 12-year-old self to grab hold of one of the many rope swings that hang from the branches of the 100-year old trees. Some of these trees have given in to the river's summons, creating river hazards that provide a poignant reminder of the wild and unpredictable nature of flowing water. The whitewater is not too difficult (class II+ maybe?), but turbulent and challenging enough to catch an unexperienced boater off guard resulting in a chilly, disparaging swim. This year, the moderate water level poses some hazards, waves, and holes but is deep enough to prevent most boats from getting hung up in shallow water. Hoping to gain more ground lost during my run, I am disappointed when the kayak leg is over despite the 25 degree air temperatures.

The jog to the bike transition in wet kayak gear is long enough to provide a jarring reminder of the cold, swift, April breeze. I add a few dry layers and snacks and head out on my bike: a bike that I ride exactly one day each year (I am thinking perhaps I should do something about this deficiency). The bike route begins by retracing the 600-foot climb of the run loop before heading up toward Pinkham Notch at the base of Mt. Washington. Despite the early climb, I am cold. My tights dry out quickly and my gloves help thaw out my frozen fingers, but my feet continue to get colder from the relentless wind that badgers me at every turn of the road. By the time I begin the 1400 vertical ft. ascent to Mt. Washington, I am already in grandma gear. In and out of the saddle, I stagger up the final 6 miles of the climb and arrive at Pinkham Notch, where my husband Dave is waiting for me with encouragement, a smile, and my ski gear.

I am pretty sure this is where things start to get sloppy. Or perhaps better to say that this is where they progress to super-sloppy. The hike up to Tuckerman Ravine gains about 2,500 feet in approximately 3 miles. On fresh legs, this would be a fun hike with the kids. With 35 miles behind me already, ski gear strapped to my back, Huckleberry Hammer Gel smeared across my cheeks and hair (bike mishap), and fogged sunglasses, it is already clear that the ascent to the ravine won't be a walk in the park for me. Dave sprightly makes quick work of catching me on the climb with a backpack of goodies for the finish line for us. He cheerfully tries make conversation until it becomes clear that I only have one-word answers for his inquiries. There is no way around the reality of the situation: I am bonking. I try to take in more calories, but spit out most of what I put in. This is one of the frustrating parts of racing for me; if I go into an anaerobic state for too much time, I lose my ability to take in the calories I need. Even the best nutrition plan can be derailed when this happens. I slow down a little, hoping I haven't waited too long. I think it is harder on Dave than it is on me that I am passed by another Elite racer during this climb. At this point, I don't care.


As Tuckerman Ravine comes into sight, I am reminded of the humility that is required to venture into mountains such as this. The walls of the ravine appear near vertical and give the illusion that they could be touched by simply reaching out. Exposed rocks along the headwall paint a majestic contrast to the white walls of snow and ice that now surround me. My momentary gasp of exhilaration and awe is interrupted by the sounds of metal edges scraping against the ice in the ravine above.

I arrive at the ski transition feeling a little better and ready to make a final push to the finish. Due to the unusually low snowfall and considerable risk for long sliding falls (2 inches of rain the day before followed by a hard overnight freeze), the ski leg is modified considerably. There would be two laps of an "adventure GS" set in Left Gulley of Tuckerman Ravine. Adventure GS means that there will be rocks, water ice, and trees as well as the giant slalom gates that would normally be expected in a race course. I snake my way up the bootpack trail to the top of the course, grateful to have recovered from my earlier near-bonk status. While the GS is... adventurous... and icy, it is actually quite a bit of fun. I am able to overtake another racer during my second decent of the GS course (who would have thought you could pass someone in a GS course? Only on an Adventure GS!) and arrive at the finish line greeted with hugs and doughnuts.

On a typical snow year, the race finish would be at Pinkham notch where spectators only get a momentary glimpse of racers as they cross the finish line. With the finish line moved up the mountain, the atmosphere of racers and cheering spectators made for a really exciting experience racing down Tuckerman ravine. In an increasingly more competitive field of 20 and 30-something racers, I am happy and honored to still be able to pull off a 4th place Elite female finish. Maybe there is some truth to the third time being the charm?

I am a Spandits!® Ambassador. Tell them Shelley sent you and use code SPANDITSLOVE to save 10% on your first online order. 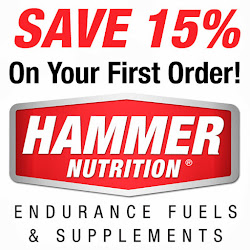